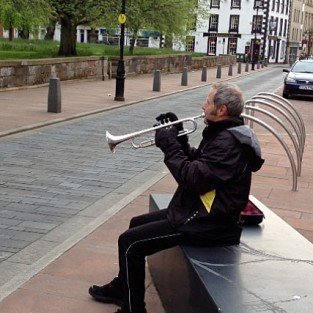 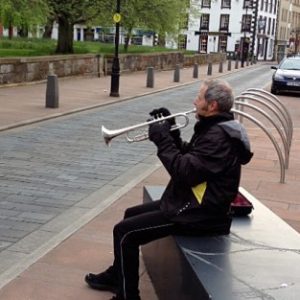 Carlisle Cathedral ringers practise on a Friday night and if you walk past along Castle Street you will almost certainly see and hear John, who has been accompanying the bell-ringers on trumpet for some years now. One evening, when bell practice started late due to a concert, a man carrying a trumpet case appeared at the Cathedral door to enquire whether there would be any ringing that night, explaining that he liked to sit outside and improvise jazz to the sound of the bells. Apparently the music of a B flat trumpet blends well with a ring of bells in E flat. His name is John Bird.

Coincidently, Carlisle Cathedral appointed a Poet in Residence in 2013. Martyn Halsall was born in Southport and worked as a journalist for The Guardian as well as being a writer and poet. On one recent Friday evening Martyn attended the ringing practice and, as a result, was moved to write this wonderful poem, Meeting Gabriel. To fully understand some parts of the poem it needs to be explained that, in order to reach the ringing chamber, Carlisle ringers ascend a long spiral staircase then walk the length of the Cathedral on the clerestory before going up a further spiral stair into the ringing room. The Cathedral has a beautiful ceiling, painted dark blue and studded with gold stars, which is appears to be held up by buttresses in the shape of flying angels. Walking along the clerestory gives a wonderful view of this ceiling.

In many religions the messenger of the Gods carries a trumpet. The messenger in the Christian faith is Gabriel whom Martyn also envisaged carrying a trumpet. So Martyn’s poem draws together those impressions of the flying angel buttresses and John Bird, the man with the trumpet, and meeting as Gabriel – the messenger of God.

Spiral into praising; wedged steps lead up to a giddy gallery above the nave.
Higher than carved angels’ choir; liana hemp is pulled for the final corkscrew to the ringing chamber.
Twelve ropes are lowered, noosed.
Air’s stilled.

Something of a ship: creaked rigging and plain timbering.
A sense of voyage as five tons of sound are raised for pealing.
Also red depth of stone where six foot walls are patterned with diamond light that evening threads through glass.
Time’s poised.

Pairs of hands grip each sally.

A slipped leash announcement: ‘Treble’s going; she’s gone’.
Everyone follows.
The hand stroke’s pulled to keep the music taught; a slight bounce, and the tail end of the rope is held at head height, keeping the bell in balance, pulled again, bounced, sally’s caught, gripped again.
Changes are called. ‘Five over six… four over seven… six over two… ‘.
A tremor’s inside the tower.

And someone asks if the trumpeter has come to improvise his jazz.
Solos off sandstone hundreds of feet below, riffling off bells, fanfare and echo, like an angel’s meeting.