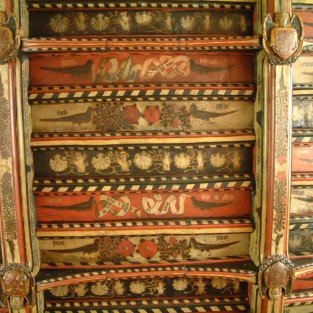 The sixteenth-century Prior’s Tower is next to the Deanery in the Cathedral Close.  Its name refers to the fact that the tower was the residence of the Prior of the Augustinian Cathedral Priory.  The ground floor is home to the Education Centre.  The first floor has a magnificient and rare Tudor painted ceiling. This room can be hired for meetings.  The top floor of the tower houses a unique collection of dolls of the Kings and Queens of England.  These were hand made by Angela Bevan and donated to the cathedral in 1995.

The tower is open to visitors on Heritage Open Day which falls in September each year.

The Prior’s Tower was built in the time of Prior Senhouse (c.1500-1520).  The design of the ceiling on the first floor reflects his patronage, incorporating his heraldry onto the painted panels.

The painted ceiling is divided into 9 compartments with two principal beams and two secondary beams crossing it.  The painting is made up of three repeated elements.  The first is the scallop of the Dacre family interweaved with the ragged staff of the Greystokes signifying the union of these families through marriage in 1488.  The second is Prior Senhouse’s popinjays depicted with scrolls and the third is Senhouse’s popinjay crest with roses and the inscription ‘senus pryor’.   Other family crests are present in the design, both painted and carved, including choughs for Scrope, eagle legs for Stanley and the crescent and fetterlock for Percy.

In addition to the painting, the ceiling has a number of bosses of different sizes including some family badges such as the Dacre scallop.  Larger bosses include angels holding the emblems of the Passion, a mermaid (signifying vanity), and a pelican in her piety (another symbol of Christ’s passion).  See left for photos of some of these bosses.

Also pictured left are two more unusual bosses whose relevance and identity have received much speculation.  One is a comical figure sticking out his tongue and emerging from a snail shell.  A traditional interpretation as a jester is unlikely to be correct as he carries a sword and buckler.  His dress is nonsensical and it has been suggested he may represent courage.

The other carved figure near him is a girl with long hair.  It has been suggested that she is St Barbara, but it is also possible that she is Elizabeth Greystoke whose marriage to Sir Thomas Dacre is commemorated in the designs on the ceiling.

There are also texts in Gothic script:

Geven unto ye by God omnipotente.

Between ye and angels is little difference,

And all thinge earthly to thee obediente.

By the byrde and beist under ye fyrmamente

Say what excuse mayest thou lay or finde.

Thus you art maid by God so excellente

Butte that you aughteste again to hym be kinde,

South Beam – Inscription on both sides

Senus Pryor, lothe to offend, Symon Senus sette yis Roofe and Scallope here, To the intent wythin thys place they shall have prayers every day of the yere.

Edge of ceiling above south window